Roanoke County Public Schools has access to Minecraft: Education Edition. While the elementary and middle school levels have had no trouble finding projects for students such as recreating Jamestown or showing fractions with the building blocks, the high school level educators have been a bit skeptical. This year, however, I have had more teachers hop on board, due mainly to the desire and begging of the students.

A Sports and Entertainment Marketing teacher approached me with a project her students were working on, looking for ideas of where they could build a professional football stadium. The students had to select an area in the United States that did not have a professional football team, propose a team to the ìtown councilî, ìsecureî a local corporate sponsor, design logos and jerseys, set pricing for tickets and concessions, and much more. She wanted the final stage of the project to be to build the stadium, complete with gift shops, parking garages, concession stands with prices displayed, and more. It took the students, working in groups of 3 to 4, about 4 weeks working half of the 90 minute block every other day to build their stadiums. The results are impressive. However, the teamwork, collaboration, and communication was even more impressive. Students had to work together to be efficient and effective in their building process. Skill levels of Minecraft ranged from novice to expert but that didnít seem to matter, there was a job for everyone. 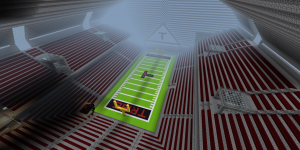 An Earth Science teacher was begged by students to come up with a Minecraft project. She found they were even choosing to play Minecraft (and would build content related items without her prompting) when they had completed all of their work! When she approached me about a project, we decided that the students should be given some freedom in their construction. They had been studying oceanography and their requirement was to show all parts of the ocean floor, complete with sea life (real and fiction), tools to study the ocean, and ways to show the current. As you can see in the picture, not all students chose to create their masterpieces in the Ocean Biome world. This group created a viewing boardwalk complete to view their ocean aquarium. While the students were very creative and often exceeded the expectations of the project, the most impressive aspect was the conversations students held during the building process. The amount of science vocabulary they were using was more than you could draw out of them during a worksheet or independent task. 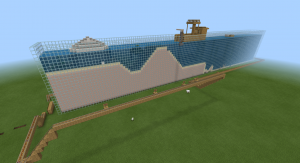 Lastly, the World Geography teacher was discussing human impacts on global regions and decided she wanted the students to use Minecraft to show the dangers of human impact and ways that it could be reversed. Students researched a given biome and had to answer questions before jumping into the Minecraft portion of the project. Once again, the vocabulary that emerged during the project was more than just normal teenage vernacular. The students were discussing real global issues and solutions. They were helping each other find ways to show the destruction in Minecraft and were very creative in their final results. 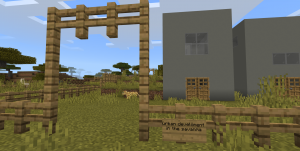 Some drawbacks of using Minecraft in the classroom? The biggest fear my teachers have is that the students know more about the program than they do. And I tell them that is just how it is! Embrace it. You are the content teacher, you have given them the assignment. It is up to the student to build (which the majority of them know how to do quite well). They will most likely only ask content questions anyways. If a student has a Minecraft question, they often refer to peers or YouTube.

The biggest take away is the opportunity to see your students flourish in an environment where they are the most comfortable. They are collaborating, communicating, using critical thinking skills, being creative, and, depending on the project, thinking about how they can be better citizens. When it comes to education technology, Minecraft is a definite way to think outside the blocks, er, box!