This year, we tried something completely new at Oak Grove Elementary in Roanoke County. Fifth graders have just finished working with Global partners in Nicaragua, Argentina, and Honduras through a Global Inventors course run by Level Up Village--and what an adventure it was.  In this course, students exchanged video messages with their partners and collaborated on designing the case for a solar flashlight using CAD software and a 3D printer.  They also examined the differences between electricity production in the United States and that of their partner’s country and discussed renewable and nonrenewable resources.  Best of all, students made a global friend, and shared aspects of their lives with them, while learning about a different country in a very personal way.

Here are some of the highlights from the course:

Because we were trying to meet a district initiative to teach Spanish in elementary school, we requested to be partnered with students from Spanish-speaking countries.  High School Spanish students then visited our Fifth graders to teach them basic Spanish phrases they could use in their videos.  They planned the lessons, created handouts, and developed Quizlet games for our students to use as they learned the language. This helped both the Fifth graders communicate with their partners and the high school students practice their Spanish.

Students exchanged video messages with their partners through the Level Up Village platform. In these videos they answered questions posed by the course itself, but also could ask their own questions. It was in this way that the two partners really began to know one another.

In order to learn to use computer aided design (CAD) software called Tinkercad, students first designed nametags. Once they had learned the basics, they began working with their global partner to design the case for a solar flashlight.  They were provided

with the electrical components, but had to make sure their measurements were correct so that components would fit in the finished case.  We printed some example solar flashlights about halfway through the project.  Students analyzed these and then used what they learned to finish their final product.

We had the added bonus of being able to Skype live with our partners.  While this does not always happen, we were lucky enough to be in similar time zones as our partners so were able to work out this experience. Students gave up lunchtime with their friends and recess to be able to talk to their partners 3,000 miles away. They had fun talking, asking questions, and joking with the class in the other country.

After we finished working our way through the curriculum, students used Kidblog to reflect on the project.  When I read their posts, it was evident that they walked away with not only a better understanding of 4th and 5th grade math and science SOLs and an understanding of Central and South America, but also having developed the softer skills of communication and collaboration.

As an Instructional Technology Resource Teacher teaming this project with the classroom teacher, I can definitely say it was one of the best projects I have helped facilitate. The organic learning that took place could have never have happened just by studying these topics in isolation.  By building a relationship with someone in a completely different country, our students made connections and realizations, and developed understanding and empathy that could not have been taught otherwise.  The personal growth I have seen in our students over the past eight weeks has been extraordinary, and I am so proud of them and so grateful for the chance to be part of it. 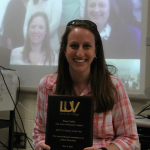 Tina Coffey is an Instructional Technology Resource Teacher for Roanoke County Schools. She is also the Level Up Village US Teacher of the Year for 2017. Connect with her on Twitter @elemitrt.